For this post, I want to go back to some stuff I did in December 2013. Some time before that I read O. H. Schade's paper Beam Power Tubes and was fascinated by the characteristics shown in that paper of what plate-to-grid voltage feedback was able to do to the characteristics of a 6L6. In fact, those characteristics looked more linear than a 300B. A 6L6 could never replace a 300B, because it doesn't have a high enough plate dissipation rating, but the linearity was impressive nonetheless.

I started to wonder what KT88 (which does have a comparable plate dissipation rating) characteristics would look like with plate-to-grid voltage feedback. I followed the procedure in Schade's paper to plot curves in Excel, which are shown below: 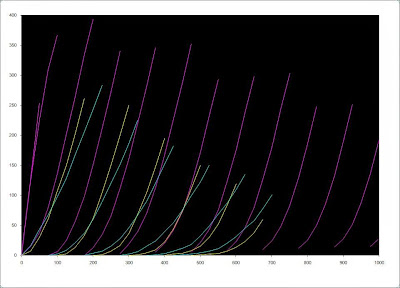 I decided that in order to do a fair comparison between a 300B and the KT88 with feedback, I needed to plot on the same area. In the plot above, the pinkish purple plots are KT88 with feedback with the feedback resistors set for a mu of 5. The Yellow curves are 300B which has a mu of about 3.8. The Cyan curves are KT88 triode connected which has a mu of about 8.

As you can see, the 300B is more linear and has a lower rp than a triode-connected KT88 but has a lower mu. But the thing that is really neat is that the KT88 with plate-grid feedback has higher mu, lower rp, and better linearity than the 300B. We have the KT88's high transconductance to thank for that. It also has the benefit of being able to reach saturation without driving the grid positive, so we can drive the plate to a much lower voltage without needing a driver to supply grid current. All of the pinkish purple curves represent negative grid voltages. Needless to say, this got the wheels spinning in my head. I was considering building a 300B amp some day but they are kind of expensive tubes. KT88s are cheap by comparison.

Now I had to figure out the best way to apply the feedback. Most of the practical designs involved capacitive coupling of some sort. I really like to keep anything that goes to the grid of a power tube direct-coupled if possible so that if the amp is over-driven, there will be no cap to charge and cause blocking distortion. There are ways to minimize this but I saw an idea in a post one day on the tube amplifier forum at diyaudio.com that showed a totally simple idea of how to apply plate-grid feedback, using a p-channel FET just like this: 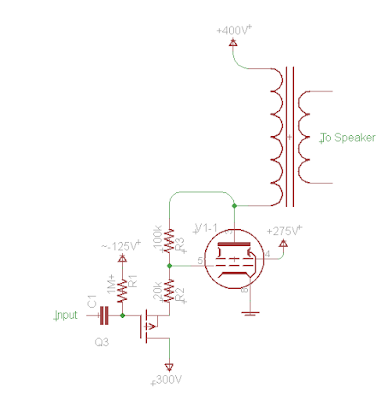 It was simple and elegant. I was in the process of building a push-pull KT88 amplifier for my brother so I altered the design a bit and came up with this: 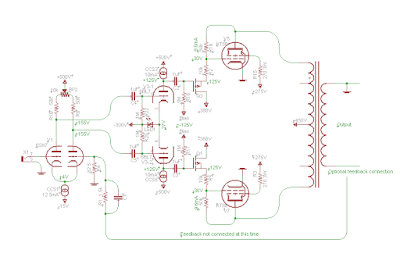 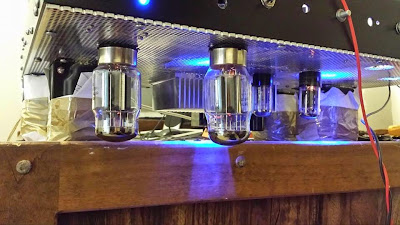 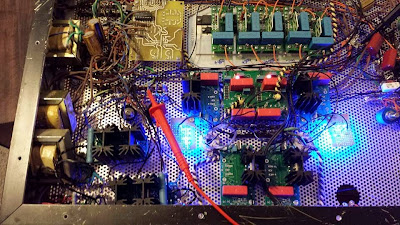 I was desperately trying to finish this amp in time to deliver it to my brother as a Christmas present so one of the things I regret is that I didn't take many measurements. I remember it put out almost 50W at clipping but I only saved screen captures of 1W and 10W distortion measurements. This was also the first time using my measurement setup based on Pete Millett's buffer box. I built a high-impedance input version so that I could take measurements with a X10 or X100 scope probe directly on tube plates. It works well but is much more susceptible to noise pickup. I later spent some time calming the noise down in the measurement setup, so please excuse the noise peaks below the fundamental. I also later discovered that my diodes that I was using to protect my sound card input were generating high-order products at higher amplitudes, so some of the high order products in the second plot may not in fact exist.

Here is distortion at 1W: 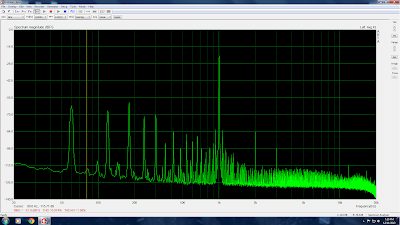 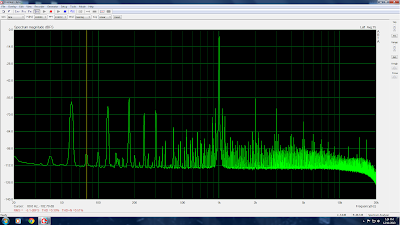 Curiously, even though I put that AC balance pot in the input stage to null out gain mismatches between the two sides of the 6BL7, I never was able to get the second harmonic on the output of the amplifier to be lower than the third harmonic. I wasn't expecting that.

Anyway, it sounds awesome, my brother couldn't be happier, and I don't think I'll ever build a 300B amp.
Posted by Heath Workman at 9:36 PM